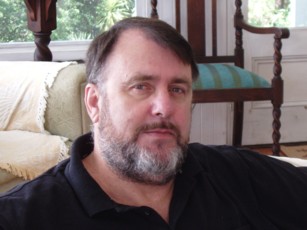 Adrian Gilbert is an Australian artist/painter living and working in Leura, a town in the Blue Mountains - noted for its village atmosphere and beautiful gardens, just west of Sydney, Australia.

The City of Blue Mountains (population approx 70,000) is set within Blue Mountains National Park, a magnificent World Heritage area of canyons and bushland wilderness. The city itself is comprised of individual towns dotted along the mountain ridges and generally separated by bushland. A railway and two main roads connect these towns with Sydney and the western regions of New South Wales and Australia.

Many artists of all persuasions have escaped the hustle and bustle of the big city for the mountains - thus making a strong arts community within an area noted for its tolerance of eccentricity. This has proved to be a sympathetic environment for Adrian Gilbert to establish a career and build a lifestyle complex of house, studio and well equipped workshop - all in a garden setting. The creation in 2007 of a gallery attached to his studio now enables him to pursue his diverse artistic interests with greater independence, although he continues to exhibit elsewhere as well.

Adrian Gilbert's vocation now spans fifty five years. Primarily a studio painter who likes to attend life drawing groups and sketch en pleine aire, his practice includes the preparation of supports and grounds for painting as well as the framing of finished work. From time to time, he also engages with a range of sculptural ideas which he began developing in the early '80s. When deadlines demand it, he focuses on special projects (thematic shows, portraits or other commissions). Most of his studio work revolves around analysis and experiments which cultivate the muse at the same time as saying something about art, the landscape, human form or life in general.

Visitors to the website (www.adriangilbertart.com) frequently comment that Adrian Gilbert's artistic output is marked by both originality and diversity. This flows from diverse sources of inspiration and an open, analytical, post-modern mindset which tells him that no single approach or style can say everything he wants to say as an artist. Most visitors to the studio/gallery are very impressed by both the refined and robust aesthetic sensitivities and the very high standards of technical expertise.

2007 to now - frequently changing show - generally open every weekend and public holiday (closed over Xmas period - usually til February or March) at Adrian Gilbert Art Studio/Gallery - cnr Easter & Holmes Sts, Leura - 10.30 to 4.30 - or by appointment at any other time!

If making a special excursion to the Blue Mountains to visit Adrian Gilbert Art Studio/Gallery, patrons are advised to ring in advance to ensure we are open when you arrive!

Adrian Gilbert Art welcomes invitations to exhibit at other venues and with other artists.